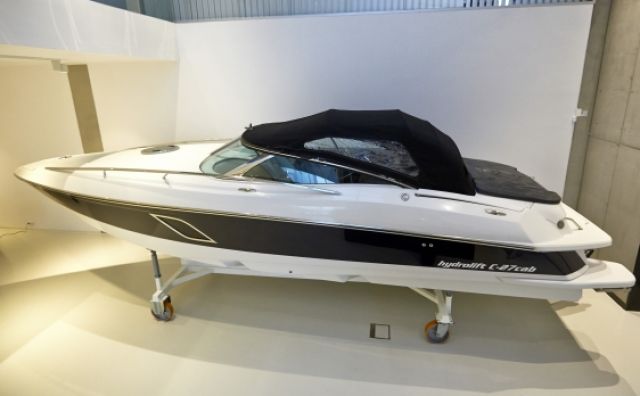 The boat is made of a sandwich construction with reinforced ribs for increased rigidity in the waves and also with a significantly increased service life of the hull. All installations have separate safety lines (as with large ships). All stainless steel components are manufactured to the highest 1A quality. The ship is equipped with power steering. The Volvo D6 370 engine is equipped with a sporty Z-drive, which is reinforced and has an enlarged control surface. The ship has separate racing controls for shifting and throttle, reaching maximum speed at sea according to conditions around 52 knots. At a higher cruising speed of around 40 knots, the consumption is around 1L / NM, at a reduced speed, of course, less. The minimum speed in the slide is about 15 knots. The ship has a bow thruster, QL trim flaps. The boat can be transported without any problems on a lift up to 3.5 t. The convertible roof is with hydraulic control of the cover and with the possibility of driving with a fully enclosed roof. There is a metallic color on the sides of the ship. Alcantara Niroxx and teak materials are used in the exterior and interior. There is a possibility of sleeping for four people on the boat. The driver and front passenger have stainless steel sports seats with the possibility of sitting and standing and the possibility of flipping in the opposite direction. There is a dining table in the cockpit. The boat includes stainless steel bathing steps, fire extinguisher, built-in 220V charger with outlet and cable, music system, Raymarine C120 navigation including card and trip computer, mechanical compass, burst fuse for fast driving, separate fuse box, refrigerator, electric toilet with separate waste tank, hot water boiler, indoor sink and, among other things, outdoor shower with separate tank.

The price of the boat includes a complete service (engine and propulsion), so the boat is ready to ride, including new anti-fouling and new zinc.

Please note that we cannot be held liable for technical data and equipment shown in boat specifications.